My neighbourhood in Kyoto 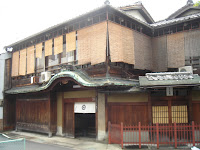 The neighbourhood I live in is named Gojo Rakuen, which means Fifth Street Paradise. It is an oasis in the middle of Kyoto. The river that ambles through the neighbourhood is shrouded with lush trees that bear oranges, figs and loquats. The oranges are great for breakfast on the run and the loquats are good too if you get them at the right time. Unfortunately, the figs are popular with the crows, and they have until now beaten me to them every time. I'm contemplating staging a sit in under the fig trees because I love figs too, but perhaps not that much. 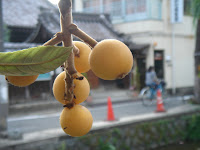 As is the way with Kyoto, our neighbourhood is rich with tradition. The streets are lined with tea houses, which used to offer a lot more than just tea if you know what I mean! Anyone familiar with Arthur Golden`s book `Memoirs of a Geisha` will I`m sure. Today the seedier side of business may have ceased, but beautiful women still scuttle from tea house to tea house, immaculately dressed in kimono. Watching them silently float down the street immediately transports you back to another era. They personify the neighbourhood`s enigma.

There`s a building on the corner, across from the old man who sells fruit and vegetables from the front of his house, which attracts a lot of attention from passers by. It seems to be unoccupied but in really good shape. It`s very old, and looks like it used to be some sort of factory. On closer inspection, I discovered a bronze plaque, which reads `NINTENDO PLAYING CARD Co.` A bit of asking around and a quick internet search revealed that this was indeed the original home of Nintendo when it started over 100 years ago as a producer of playing cards in Kyoto. Now it`s a museum that is never open. It stands as a silent, almost invisible reminder of a multi million dollar company's origins, for anyone who would care to know.

I live in a two storeyed `Machiya` or Japanese style house with three other people, a cat and a ferret. The ferret we named Walter, and he spends the winter in our ceiling. He doesn`t pay any rent, but he helps keep the mice at bay - so we let him stay. I say that like we have a choice, but in actual fact I think he has the run of the place. He`s often heard but rarely seen and on the rare occasion that he is spotted, it`s usually as he is on his way down to the river. I don`t know if ferrets strut, but I`m pretty sure that`s what Walter does. He struts down the road with a ferrety look on his face like he`s in on a secret, or maybe he`s just happy as us to be living in our neighbourhood.

It`s no secret though who the neighbourhood belongs to. It doesn`t belong to the tea houses, the crows or the ferret. It doesn`t belong to us, or the Mario Brothers or any of the other residents really. It is a Yakuza neighbourhood. We live next door to a six storey building that is as conspicuous as a sumo wrestler at a golf tournament. The rest of the street is little old men in funny pants, or foreign residents like us - tourists really. This hulking great building intimidates by its sheer presence alone. There are video cameras posted outside that survey the street 24 hours a day, and a 20 car garage occupied by black or white cars straight out of the gangster car catalogue. `How would you like your windows sir? Tinted? Certainly. Good choice sir.` You can often hear them grunting "Osss" to a car as it arrives, and there will usually be one or two suits yapping away on the cell phones or smoking cigarettes dong their best to look like gangsters, and funnily enough, succeeding. It sounds funny, but I feel perfectly safe living next to the friendly neighbourhood Yakuza. They make sure the streets are clean, safe and quiet. Theres never any annoying vendors that pester other parts of the city, nor do we get any door to door evangelical types like I did at my last two places in Japan. It`s a bit like living next to a caged bear though, it`s exciting and definitely unusual, but I`m not going to stick my hand in the cage. No thanks. I get the feeling that the landlord prefers to have foreigners living our house as opposed to Japanese tenants. Maybe he feels we have no association with that side of Japanese society, or hang ups about it. (We don't, however most of my Japanese friends think we're crackers for living there). The way I look at it though, if we weren't welcome, we wouldn't be there. Simple as that. Like I said, it's their neighbourhood. Their "Kinjo".
They treat us as most other Japanese people do. That is with respect and a sense of inquisitiveness, an attitude which is wholeheartedly reciprocated, particularly in this case.

Last night we were sitting on a railway sleeper that thinks it's a foot bridge watching the fireflies. They come out at this time of year to briefly illuminate the riverside. As we were wandering home, we saw a woman standing on the bridge, gazing off into a tunnel of trees, obviously firefly spotting herself. We shared a smile, and an obligatory bow amongst the three of us. No words were necessary, the look said it all. Welcome to the neighbourhood. 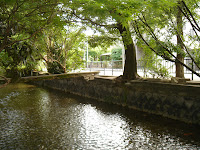 So interesting ... Walter sounds like a real character (a real dag!)
I'm sure you've opened up sides to Japan few know.
That unofficial Nintendo museum's fascinating.
Can't wait to get to your place and see for ourselves!
My fav line - Last night we were sitting on a railway sleeper that thinks it's a foot bridge

I wonder if anyone will ever be able to beat your mother to the 1st noter position :)

Yes I would be the young one...always :)

Your writing style is great, so easy to read with a wonderful injection of humour.

Your making me want to come visit...keep it up:)

I used to see Yakuza cars outside my church in Osaka, in fact I think the church building used to be an illegal gambling den before they turned it into a church.
Anyway, I'd forgotten how common ferrets are in Japan and I remember people telling me about the fireflies but never managed to be in the right place at the right time to actually see them.
Kyoto is a lovely city, it has much more character than Osaka, although I do love the mass urban sprawl of Umeda. I'm going to feel all natsukashii if I hang around this blog too long!
Anyway, great blog! Your writing style is similar to your Mum's, which is a compliment, btw!

chiefb... sent me from her blog. I lived in Japan for two years near Misawa (on the Air Base). It was a great experience.

I still shiver about the Kappa.

One Irish reader here. Chief biscuit guided me over. Your neighbourhood sounds intriguing. Beautiful writing too. Where else are you planning on going? I want to read that too. :)

Okay, just so I get this straight.
There are Geisha floating around in Kimono on your block (I own that movie, btw), there are tea houses, a footbridge with fireflies, and fruit trees.


I am officially jealous.

Great photos all over your page, too.