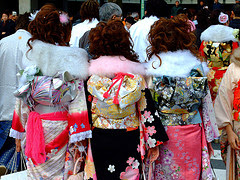 Today is Seijin-no-hi, or Coming of Age day in Japan. The dullness of winter is temporarily interrupted by a sudden rush of colour as youngsters who have turned 20 in the past year dress up and gather with their friends to celebrate their transition to the adult realm. The girls wear their best and seemingly brightest kimono, with the splashes of pinks and reds inescapable as you walk down the street. The boys on the other hand usually don a smart suit - perhaps foreshadowing the attire many of them will spend most of their adult lives wearing anyway! Needless to say, the kimono-clad beauties strike a much more festive chord, as they add a little bit of music to the dreary winter streets of Kyoto.
20 is the all encompassing age for most adult activities in Japan, the main exception being marriage, with the legal age for this being 18 for boys and - get this - 16 for girls! Turning 20 however is the major milestone for young people here, as they can now drink, smoke, vote and drive to their hearts content, although advisably not all at once, nor in that particular order.
This set of responsibilities is often given in exchange for a pledge made by the youngsters at ceremonies organised by local governments, in which they promise to be respectable members of society. Then, with pledges made and responsibility garnered, they head out into the cold winter`s night with their duty-bound companions to drink smoke and vote - as is their social obligation.

We went to see a particular Seijin-no-hi event yesterday at one of my favourite temples in Kyoto; Sanjusangendo. Every year a Kyudo (Japanese archery) competition is held here, following a long (long) tradition of the art at this temple. Kyudo is the oldest of all Japanese traditional Martial Arts, and has strong religious connections with Seijin-no-hi. Of course I was unaware of all this until yesterday, but such is the beauty of living in a city like Kyoto! 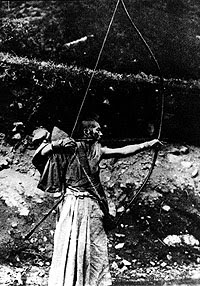 ; The Way of the Bow http://www.shindokan.dk/offentlig/artikler_andres/zen_og_kunsten.php

Admission to the temple was free, a rarity in itself, and as we joined the throngs of people pouring into the grounds to catch a glimpse of the performance of this art by sensei and seito, I was struck by the colour and beauty of literally hundreds of kimono-clad twenty year old girls lining up for their turn to fire an arrow at the target. What a sight! The sensei(s) had gone first I suspect, followed by the boys, and we had arrived in time to see my fiance's cousin take her shot along with some 2000 others. There was something at once addling and enchanting about the sight of all these sweet, innocent looking doll-like Japanese girls, with elegant hair and make-up so delicately applied all armed with 6 foot bows and arrows at the ready. Each a picture of purity, but also lethality - to a maiden.

We watched as the colourful archers took aim and let fly with varying degrees of accuracy. To advance the students had to to hit an 80 cm target that stood some 60m away twice with their only two arrows, while under the persistent and expecting gaze of countless spectators, not to mention the constant flashing of the spectators own weapon of choice. It was an unenviable position to be in I must admit. This pressurised situation must have really called upon the Zen fundamentals of the art, to be able to block out all the distractions of the day and focus solely on hitting that circular target with your arrows.

At the end of the day though, this was not a battle, and the target was not going to shoot back. This was an exercise in discipline and concentration. These young adults were lining up to ritually enter the adult world by focusing on a task and giving it their best shot. The majority of the arrows missed their targets, but I don't think was so important. I think the fact that these young people had the spirit to stand there in front of a thousand people and focus on nothing but their goal resonates a lot more with becoming an adult than being able to hit the target 100 times out 100, or being able to buy a packet of cigarettes.
Posted by 松 at 5:20 AM

I'd already read about this festival in another blog ... Mapiprincesa's ... not realising that you were attending the very same festival watching E's cousin - which makes it a more personal (to me anyway) event. Loving this culture immersion!

Still a cool blog--like a visit to Japan! Love the picture of you in your yukata!

Loved the verbal picture of the old man and his granddaughter watching fireworks together, and their (probably) different associations with the colorful explosions. I would like to hope that every child in the world would never have to see this celebration as other than a beautiful display.

Hello. This post is likeable, and your blog is very interesting, congratulations :-). I will add in my blogroll =). If possible gives a last there on my blog, it is about the Home Theater, I hope you enjoy. The address is http://home-theater-brasil.blogspot.com. A hug.

Are you ever going to blog ever again?? :) Is there nothing happening in your life or what? ;)