The arrival of summer in Japan is heralded by a flurry of fireworks, festivals and fancy dress. The flavour of the festivals depends on where you are, but the fundamentals are always the same.

Summer festivals in Japan involve a lot of people, and it seems the more humid the
weather, the more people there are. Cramming in like salmon in a sushi roll, people jostle for position to get a good view of the passing floats and performers, all the while frantically fanning themselves, with the plastic fans that are dished out by the hundred. These fans (which unashamedly advertise everything from beer to movies) are vital to maintaining a cool body temperature whilst rubbing sweaty shoulders with the locals. They are flapped up and down vigorously, yet with a concerted economy of movement,so as not to whack the person standing alongside. I believe that elbows in and quick wrist snaps is the key, but I`m more prone to whack people than most, and so I tend to try and bludge a breeze from one of the more vigorous fanners; terrible.

Meanwhile,the crowd rolls around , heads bobbing up and down like buoys on a rolling tide, as they try to peer over the inevitably two or three inch taller person in front of them to get a good look at the passing performers. All this, remember while trying not to whack someone with their fan, or be whacked by someone elses fan, or even worse, unintentionally fan some cheeky foreigner who is free loading from your fan. Quite a work out really, especially in stifling humidity, so thank God for the yatai!

Yatai are food and beer stalls, and a staple of any self respecting summer festival. They offer the standard festival fare: Candy floss is a favourite, as are toffee apples and fried chicken. But a festival wouldn`t be a festival without okonomiyaki ( a kind of pork and cabbage pancake) or takoyaki (octopus dumplings) now would it!? 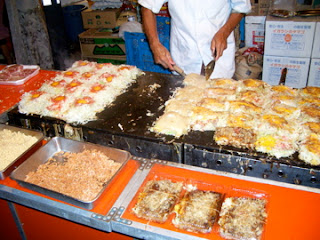 Nothing like cooling off with a beer or three, and maybe some squid on a stick, after scrummaging with sweaty Japanese in their Yukata.

(Yukata is a kind of kimono, worn by men women and children during the summer months. As you`d imagine they`re very cool, although I still haven`t worked out how to sit down in one without clearing the room. Very tricky garments are the yukata, but I can`t help feeling a little like a `bushi` whenever I`m decked out in one). 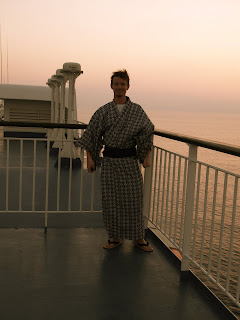 The main event at most summer festivals though is the fireworks. Literally millions of yen worth of fireworks are sent fizzing into the night sky, with stunning results that last for up to an hour. I visited the Toyama festival last week, and ended up standing basically underneath these massive pyrotechnic showers. No matter how many fireworks I see, they still keep me entranced, and I`m unable to turn away as one after another spray spectacularly into the night sky. The noise is enough to be heard from kilometers away, and the darkness is again and again ripped apart by huge flashes of green and yellow.
I don`t know if the irony of commerating the day that Toyama was destroyed by bombs during the Second World War (August 1st) with a huge fireworks display every year is lost on the residents or not. I think it might be their way of confronting the horrors of the past by replacing such a horrible image with one of celebration and enjoyment. I watched an elderly grandfather, who was easily old enough to have seen those horrible times first hand clutch his granddaughter`s shoulders as they both watched the sky transfixed; the young girl blissfully unaware of the significance of the day in the city`s past.

The fireworks will continue whistling and fizzing throughout the summer, and the humidity won`t relent for a while yet. But at least we`ll have the beers stalls and plastic fans to see us through, and what would summer in Japan be without those!?
Posted by 松 at 7:03 PM

You NEVER disappoint. I absolutely loved this post, it's wonderful. Laughed all the way through and enjoyed it so much. Please post more often.

Aren't festivals the best? I just posted about the Dragon Boat Festival in Denver... but it's not as interesting as the real thing... I think.

The fireworks sound so great, I could watch them for days. Your description of them is excellent. Ripping darkness apart. Just excellent.

Also loved that you free loaded fanned air... too funny.

As above!
Great to see you writing again ... I too loved the description of the fans and the crowds and of you (trying?) to wear a yukata. What is a bushi?
All of it is entertaining and informative. A treat.
The description of the grandfather and his granddaughter is sobering ...

Great entry - you can almost smell the crowds from your description.

I very much enjoy your take on Japan, please write more!