A `shroom with a view 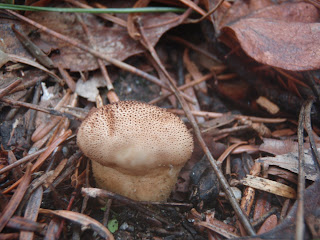 It was after a few days of consistent spring rain, when the sun shone down on the sacred park known as the Gosho, and the weather warmed their backs that the members of the Kyoto Mushroom Club congregated one Sunday morning. Armed with magnifying glasses, tripods and a zest for all things fungi, the intrepid mushketeers looked forward to a marvellous morning of mushroom viewing, The precipitation whet their anticipation. There were sure to be mushrooms galore. 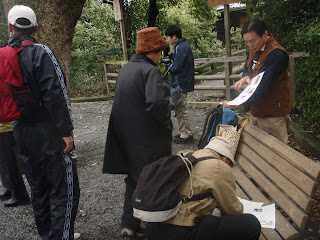 Registering their names, and receiving Mushroom Monthly, the weekly newsletter.

A crew of twenty five strong set off on the route proposed by their intrepid leader, whose pendant was said to be the source of his tremendous knowledge of mushrooms. Their enthusiasm was only tempered by his dire prediction of trampled fungi should the excitable mob not tread carefully. It was with purpose then , but also a sense of caution that the hunt for the sticky thicket dwellers commenced. 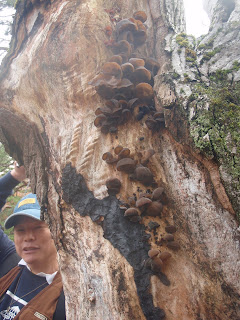 The leader of the pack. A real fun guy. Note mushroom pendant AND mushroom sweater.

After a few minutes came the cry everyone had been waiting for: "Mitsukataaa!" "I found one!" They swooped on the discovery like a flock of pigeons on a chip packet, cooing at the momentous mushroom as you would a new born baby. 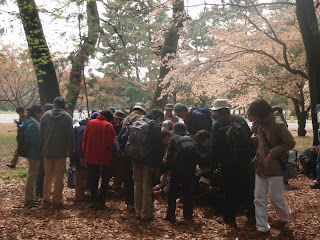 Tools of strange description came flying out of pockets to burrow and pick around the stem. Magnifying glasses were shared around as people peered and craned to see. Then another cry, and another, soon people began congregating in so many places that the intrepid leader didn't know who to divulge his knowledge to first. Sprouts of all sizes and shapes were being spied and examined, each one being dutifully noted in the mushroom minutes, before being left to lie limp in the soil. As if a hedgehog had snuffled it up but at the last moment decided to move along. And move along they did, after three hours they had completed a full circuit of the enormous park. 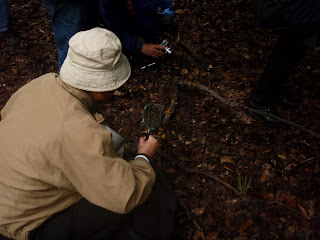 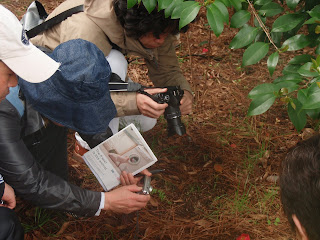 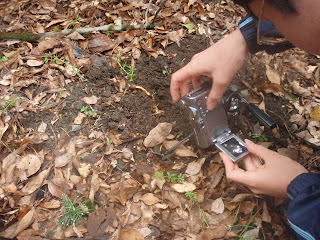 By the end of the tour 32 different types of mushroom or toadstool had been found, fondled and filed. A satisfactory morning's work by all accounts. The session finished that sunny morning with one final speech from a senior member of the group bemoaning the act of mushroom picking from the park. The mushrooms were to be appreciated by everyone, he insisted, and should not be pillaged - besides which, he noted, people still die in Japan every year from eating unknown mushroom varieties. Apparently this hobby is not without its dangers, not that it would ever deter these dedicated followers of fungi. 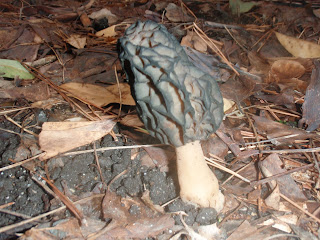 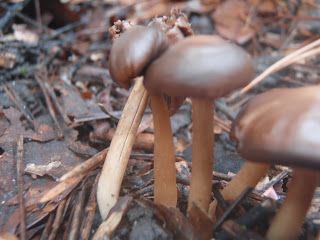 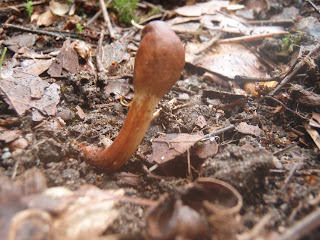 Truly fascinating. Love the puns! Very funny - or should that be 'funngy'?

I've given you an award.

Those cameras are right in there. They'd get one well with the French and Italian, who have acres marked off for private mushroom hunts.

Here the Baltic migrants pick all our wild mushrooms. I think the Clearances and Industrial Revolution deprived us of all that knowledge.